The ideal conditions for solar panels tend to be cool sunny weather with no clouds in the sky. While this would be appealing weather all around, sometimes the climate can take a turn and become extreme. Strong downpours, winds, and even hail can be the extreme weather that you may experience in your area. While all of this extreme weather can be concerning, your solar energy system is tougher than it looks.

How resilient are solar panels?

Testing and certification of solar panels for their quality and durability are led by the International Photovoltaic Quality Assurance Task Force (PVQAT) funded by the Sunshot initiative. The PVQAT creates standardized quality tests to ensure the durability of solar panels, and the quality of their manufacturing and sets the guidelines for system quality inspections. The National Renewable Energy Laboratory (NREL) scientists are also funded to work with the PVQAT to ensure U.S. solar panels are up to their standards.

Considering the research being conducted on solar panel technology, the current solar panels in the market right now can stand up to extreme weather. The National Renewable Energy Laboratory (NREL) published a report in 2015 that details its plans for reliable solar panels. The number of systems affected by defects and underperforming panels is low. Out of 50,000 Solar PV systems analyzed, just 0.1% each year reported issues.

How do solar panels stand against heavy rain, snow, and ice?

Solar panels are built to be waterproof to protect the electronic components inside. So there is no need to worry about water getting into your panels unless it has a faulty seal. Snow and ice build-up are unlikely to cause any damage as well. As panels are built to withstand extra weight on top of them. Although, if your panels are covered by snow or ice, it will hinder their ability to generate power. This isn’t much of a worry as the snow will melt right off your panels faster than your roof.

Hail is one form of extreme weather that solar panels are built to withstand. While hail can greatly damage cars and other property, solar panels are generally certified for hailstones up to 25 mm (one inch) in diameter. With their falling speeds at 23 meters per second which is roughly 50 mph.

In 2017, the NREL Laboratory in Golden, Colorado was hit by a massive hailstorm. More than 3,000 solar panels were used to power the campus, and out of all of them, only one panel was broken. Golden was one of the areas hit the hardest. To give you an idea of how much damage this storm did, the damage caused resulted in about $2.3 billion in insurance claims according to Rocky Mountain Insurance Information Association. This storm is considered the most expensive insured catastrophe in Colorado’s history. 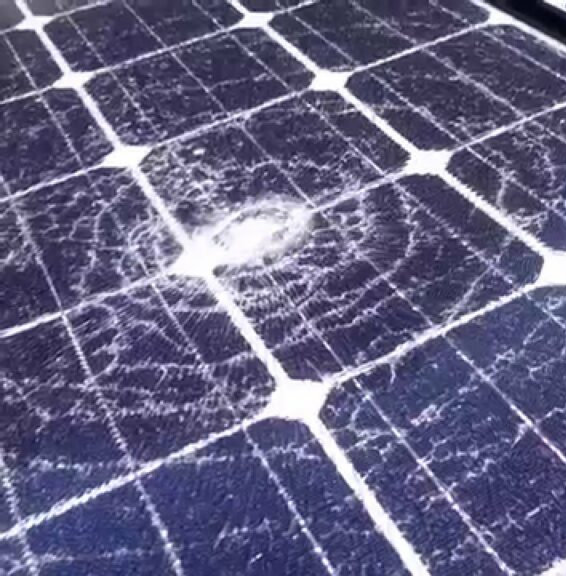 Most solar panels are certified to withstand wind speeds of 140 mph. Although the standards for wind speed certifications can differ between regions. Especially those that are prone to hurricanes, which would ask for a higher rating that can go as high as 185 mph. While these strong winds are dangerous, they aren’t likely to cause any damage. The waterproofing and hail certifications on solar panels make them capable enough to handle the inclement weather itself. What’s more dangerous is the debris carried by the strong winds that can impact your home and solar panels.

In regards to tornadoes, most solar panels will be able to withstand an F-1 scale Moderate tornado that has wind speeds between 73-112 mph. These tornadoes can cause damage to your roof, move cards, and mobile homes around, and even damage some lighter structures. According to Iowa State University’s Extension Disaster Education Network (EDEN) disaster fact sheet, the average forward speed of a tornado is between 30 to 70 mph. 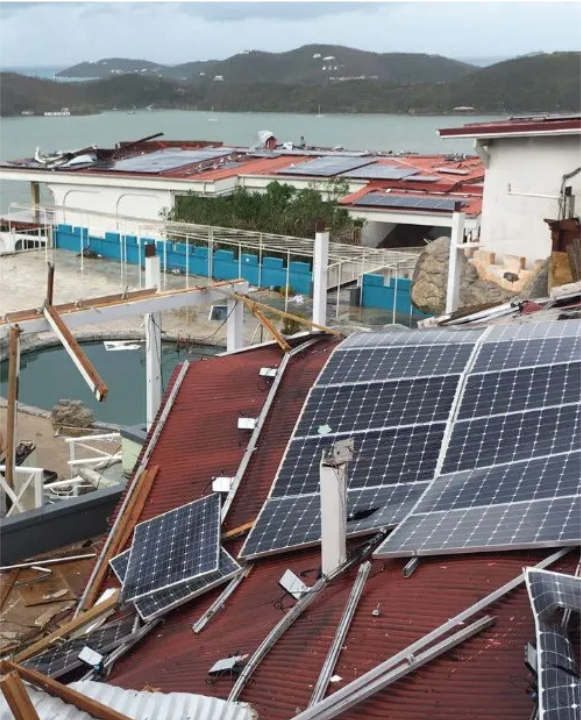 How do solar panels help during extreme weather?

While it’s clear that solar panels can withstand extreme weather, they can also help those that are in need. Some of the most extreme natural events can cause serious damage to infrastructure and take lives. In the aftermath of such events, one of the main goals of relief workers is to re-establish power to support relief efforts such as remote hospitals’ water purifiers. Solar power has helped in disaster relief before and in different parts of the world. Solar power also ensures the stability of electricity and other infrastructure during such events, in the case of disrupted electricity grids and downed lines.

Hurricane Maria devastated the northeastern Caribbean from Sep 16 to Oct 2, 2017. The hurricane reached speeds of up to 175 mph. It caused an estimated $91.61 billion (2017 USD) in damages and took the lives of 3,057 people. It is considered the costliest disaster in Puerto Rican history. After the disaster, Tesla offered its solar power products to help in the restoration efforts. The island has also seen a shift to solar power to ensure the resilience of its power grid.

When Nepal was struck by a 7.8 magnitude earthquake back in 2015, the capital of Kathmandu was greatly damaged. SunFarmer, a solar non-profit, provided their solar energy technology to repair the street lights in Kathmandu. They also provided solar water purifiers and portable solar energy systems to villages.