How do winter and snow affect solar panels?

If you’re living in a state or area with snowy seasons, you may think that solar energy won’t work for you. In reality, solar panels will still function in snowy weather. When it comes to how winter and snow affect solar panels, some misconceptions need to be cleared up. This will help you understand if solar panels are suitable for you and your climate.

The effect that temperature has on solar panels is on their efficiency. This is because solar panels are electronic devices. The hotter an electrical device gets, the less efficient they become. This is the law of thermodynamics in action, where increased heat leads to reduced power outputs. How temperature affects a solar panel is quantified by its temperature coefficient. This coefficient is listed as a percentage per degree Celsius and is generally listed on their datasheet.

When solar panels are tested in a laboratory, their power output is measured at a baseline temperature of 25°C. From the baseline, the testing can show how temperature affects a specific model of solar panel. For example, if a solar panel has a temperature coefficient of -0.30% per °C, the power output will drop by each °C past 25°C.

What is the effect of colder temperatures on solar panels?

Generally, solar panels tend to operate at their peak efficiency between 15°C and 35°C. This ideal efficiency range can vary between different panel types and models. Cooler temperatures have a positive effect on the performance of solar panels. This results in solar panels having a positive coefficient when operating in colder climates. Results in higher efficiency over their standard rating and improved performance.

The reason why the cold weather produces more energy is due to the state of the electrons when reacting to sunlight and temperature. Electrons have a resting and excited state. They become excited when exposed to the high energy of the sun’s rays, and increased temperatures. When the electrons are at lower temperatures, they move less. This matters as the difference between their resting and excited states determine how much more voltage your panel can produce. Electrons already excited by heat won’t react as much to sunlight compared to slower electrons in the cold. This is why colder temperatures aid solar panels and their performance. 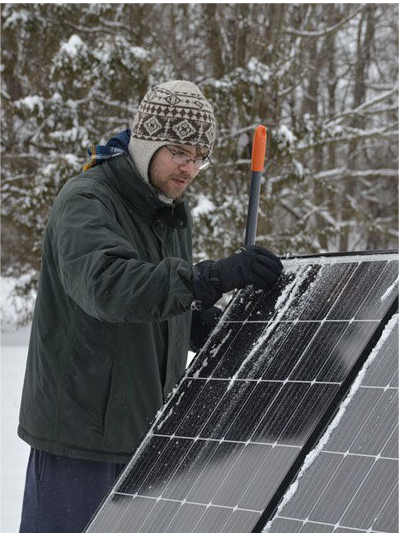 Snowfall is a staple of the winter seasons, as due to the colder temperatures precipitation turns from regular rainfall into snowfall. Snowfall can affect solar panels in multiple ways, in most cases it can negatively affect the performance of solar panels. Although in some cases they might help you get a bit more performance. Generally, the effects of snow when it comes to solar panels are more direct.

The most obvious effect of snow is reducing the performance of solar panels. This can happen with increased snowfall during winter storms and/or heavy snowfalls. If snow starts to build up on the solar panels, it can start to block your solar panels, reducing their performance. To remedy this, you would either need to wait for the snow to melt away, or clean it off. Although, lighter snowfalls won’t largely impact performance, as UV rays can still go through small amounts of snow. Light snow generally gets dusted off by the wind or melts away under sunlight.

You won’t need to worry about the weight of snow on your solar panels. Solar panels are mounted at such an angle for excess snow to slide off. The dark reflective glass of solar panels causes the snow to melt as well. But in some cases, snow accumulation can become so heavy on solar panels, causing mini-avalanches that can damage homes and property and cause injuries. This is why snow guards are recommended for solar energy systems in snowy regions. 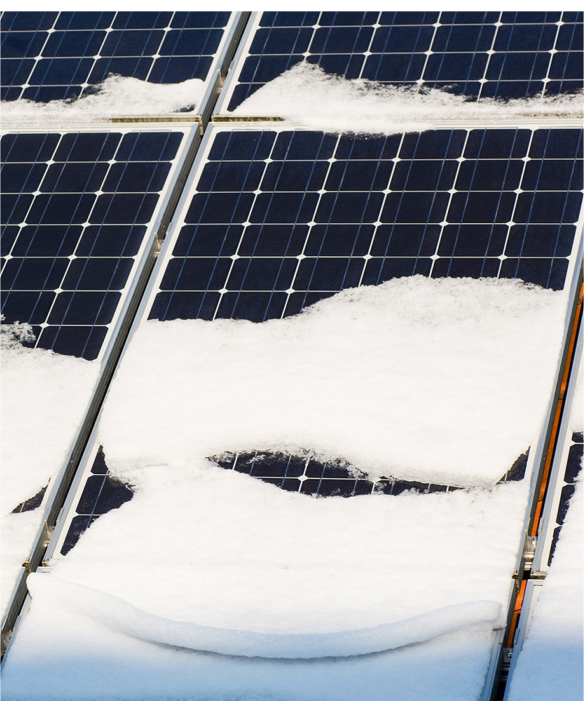 One interesting benefit that snow can give you is during cold and clear days. In these conditions, extra sunlight is reflected off the snow and towards your solar panels. This light reflection is called the albedo effect, and it’s something snowboarders and skiers are familiar with. This effect can give your panels an extra boost in performance during the winter.

How common are solar panels in winter states?

Solar panels have become more economic for cold weather states thanks to high-efficiency solar panels and solar battery storage solutions. While states such as California, New Mexico, and Florida are ideal for solar. Massachusetts and New Jersey were in the top 10 states for solar installations in 2018. New York also joined the top 10 for solar installations in 2019. You’ll even see solar panels being used in Alaska and Antarctica. It’s safe to say that you can enjoy the benefits of solar even during the snowy seasons. The benefits of solar come from the year-round savings. So don’t be discouraged if you do see some dips in performance during the winter.